How Can Quicker Dispute Resolution Help the Economy of a Country

It is a well-known fact that litigation is a punishment for any individual seeking justice. The primary reason for that is the financial investment that litigation demands.[1] The economic burden of a court case often turns the process itself into a punishment, thereby disrupting access to justice for the litigants. Therefore, Alternative Dispute Resolution (“ADR”) attained traction and became a tool for settling disputes as opposed to the traditional judicial process held by formal courts.

The growth and adoption of ADR have been justified many times over by the many benefits it offers for the dispute resolution system of a country. The benefits of ADR programmes’ cost and time savings are heavily evidenced. In this article, we argue that ADR, including elements of ODR, will lead to improvements in court effectiveness, business environment, and trust in the legal system, culminating in the economic development of the country.

What is the relationship between the economy and dispute resolution?

The ability of a country to enforce contracts is essential to support the efficient allocation of resources and growth in an economy. The ease with which you can enforce a contract varies dramatically across various jurisdictions. According to the World Bank’s 2020 report on the Ease of Doing Business, India ranked 163rd out of the 190 participating countries on the list, which ranked countries on the ease of enforcing contracts in their jurisdiction.

As of 2022, it takes an average of 626 days to resolve commercial disputes through the court system in India.[2] So, to get justice in the courts in India, the litigant not only suffers due to the high costs, complex and inefficient proceedings, and stress caused but also due to the time it takes to conclude proceedings.

It is not unusual to state that if a country’s adjudication processes are long, complex, and inefficient, then the price that businesses must pay in regard to these factors is also high.

In some instances, the price and perceived risk are so high that corporations are deterred from conducting business in a given country. Therefore, it is essential that adjudication processes, particularly those involving low-value disputes, be concluded expeditiously[3].  Such quick resolution can be resolved through ODR which can even involve the automated resolution of small claim disputes.

According to the European Commission, a properly designed Dispute Resolution System (DRS) could save roughly €22.5 billion annually, which at the start of the previous decade represented 0.19% of the EU’s GDP. [4] This is the power that quicker dispute resolution systems like ODR yield. Ultimately, a speedy resolution of cases impacts investment and economic growth positively.

Why ODR?  Why not just Physical Arbitration?

Originally, arbitration was intended as an alternative to court litigation for various kinds of disputes. But with time, today, this method itself has become cumbersome and expensive. The Law Commission of India also acknowledged the rising costs of arbitration in its 246th report. It noted that the basic problem with arbitration in India was the large sums taken as fees by the arbitrators for the proceedings. The report showed that the fees charged were unilateral and disproportionate. Thereafter, the Fourth Schedule of the Arbitration and Conciliation Act, 1996, was inserted which provided for a specific fee structure to the arbitral tribunal based on the quantum of the dispute.

Further, approximately 82 calendar days are required for the Bombay High Court to rule on a Section 11 petition.[6]

Therefore, for a dispute claim which is worth a few thousand rupees, the result will not justify the cost and time taken to resolve the dispute, and the use of ADR is wholly ineffective in such cases.

Thus, while ADR has exploded in popularity for larger businesses, it is not feasible for small claim disputes or small businesses, especially those belonging to the MSME community, which is the backbone of the Indian economy. These steep costs of litigation effectively deter citizens from pursuing legitimate legal claims and keeps India’s most disadvantaged from having access to fair and affordable grievance redressal mechanisms.

Daksh’s Access to Justice Survey (2017) shows that of those respondents that did not approach the courts, 26.8% did not file a case in courts due to the high cost of litigation.

On the other hand, Online Dispute Resolution (ODR) offers the promise of a faster, more accessible, and more convenient option for many individuals and companies to resolve disputes online[7]. ODR often makes use of ADR tools such as arbitration, mediation, and negotiation with the added use of Information and Communication Technology (“ICT”).

The added use of ICT in ODR proceedings makes it much more efficient and convenient for the parties and can contribute significantly to improving access to a variety of dispute resolution processes.[8]

The use of ICT tools drastically reduces the costs involved since it eliminates the requirement of a physical space to conduct proceedings, travel fare, and other ancillary expenditure while travelling to the venue of proceedings. It also offers an added advantage i.e., ODR is more accessible to the differently abled than courts or ADR.

Apart from the tangible costs that accrue in ADR, there are other indirect costs, often faced by enterprises, on account of lengthy proceedings. For instance, enterprises see the loss of productive time, loss in the well-being of individuals, loss in investor confidence, and reduced investments as a deterrent in attempting to access justice. It consequently also slows down economic growth. While all these impacts cannot be completely remedied by ODR, it can help in mitigating them and therefore proves to be cost-effective[9].

As discussed, an effective Online Dispute Resolution mechanism is the need of the hour, particularly keeping in mind the increase of e-commerce and e-business[10]. With the recent exponential increase in digital penetration among the masses, this is also the right time to mainstream the use of ODR.

Studies have shown that increasing access to dispute resolution by 1% against global benchmarks can lead to a 0.17% higher annual GDP growth. This boost in the macro economy is beneficial to stakeholders at all levels alike[11].

It is about time we understand the level of impact ODR can generate. In the current scenario, it takes 1,445 days, or almost 4.5 years, to enforce a contract in India[12]. On average a litigant will end up spending about 31% of the claim value on out-of-pocket expenses such as court fees and legal fees[13]. The economics of enforcing a contract demand that the cost of enforcing a contract must be lower than the benefit one intends to reap on its enforcement. If the cost is too high, it is not feasible for a contract to be enforced at all. In such a scenario, the parties to a contract will have to depend on either benevolence or a good relationship to enforce a contract.

Such systems lead to an increase in the number of breaches as parties do not fear facing any legal repercussions. This further leads to the breakdown of a large number of deals, causing significant losses to businesses and individuals across the entire economy. Uncertain cash flow is a major reason why businesses shut down and face bankruptcy.  The problem of cash flow is further compounded when there is uncertainty regarding the enforcement of contracts. India cannot hope to fulfil its dream of becoming a developed economy in the decades to come if this problem of contract enforcement is not resolved.

To conclude, when a country has a well-functioning judiciary, the economy of the country prospers. Where the judiciary is not accessible to all the individuals of the country due to varied reasons, alternatives are required. ODR institutions are useful because they are more accessible to the masses. As ODR aids the resolution of disputes for individuals, domestic businesses, and foreign corporations, it plays a dominant role in resolving disputes at all levels of society.

A well-functioning dispute resolution system thus increases access to justice and subsequently helps in strengthening the economy of a country.

[5] Sharma, D., Editor and Indulia, B. (2020) Appointment of arbitrators under Section 11 by the Supreme Court: A time intensive phenomenon, SCC Blog. Available at: https://www.scconline.com/blog/post/2020/11/28/appointment-of-arbitrators-under-section-11-by-the-supreme-court-a-time-intensive-phenomenon/ (Accessed: December 1, 2022).

Dhriti Hundia is a member of the Research and Content team at Presolv360.

View all posts by Dhriti Hundia 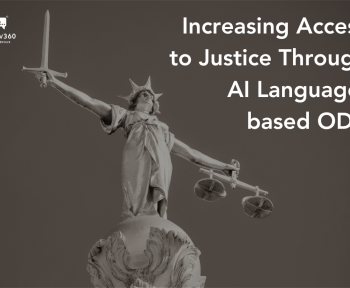 How AI-language Based ODR Can Increase Access to Justice