How AI-language Based ODR Can Increase Access to Justice

The legal repercussion of mistranslation is a story as old as time. In the year 1851, the Sultanate of Sulu in the Philippines and Spain signed a peace treaty. According to the Spaniards, the agreement meant that the Sultanate accepted Spain’s sovereignty. The Sultanate presumed it to be a peace treaty. In 1878, the Sultanate repeated the same mistake, this time with a British commercial syndicate. While the Sultanate agreed to a rental, the British version in English stated that it was a sale.

In legal translation, mistakes cost lives. In 2012, Canadian Superior Court Justice Anthony Hill declared a mistrial in the sexual assault case of a Hindi-speaking Indian citizen working in Canada at the time – all because of inaccurate legal translation. The court’s interpreter mistranslated phrases from the victim’s testimony, including “sexual assault” as “physical assault”, “genital area” as “between the legs”, and “two days” as “a couple of days”. Unfortunately, the sad reality is that cases like these are more commonplace than one would think. Many translation mistakes go unnoticed, which means they have a significant impact on the final verdict.

Even in contracts, an interpretation mistake can result in huge monetary losses. It can also potentially result in contract terms being violated, resulting in lawsuits that hinder business growth. For example, at the highest level, translation errors have cost entire countries, as observed in the case of South Korea, which failed to secure an FTA deal with the EU in 2011. No less than 207 translation errors were found in the country’s second attempt to draft the bill. Worse still, South Korea followed up by making the same mistake with the US a month later, failing to secure FTA deals with the world’s two largest economies in the space of a month.

Therefore, the importance of legal translation is of paramount importance, especially in India, one of the most linguistically diverse countries in the world, with 22 scheduled languages and over 120 spoken languages.

In India, the number of people speaking the same language is segregated majorly based on geographical parameters.[1] The country’s richness of languages means that people are linguistically diverse, even within the same state. In a study done to see the number of languages spoken in a state from among the 22 scheduled languages, it was seen that all states have multiple languages adopted by their population.[2]

Amongst all the states, nine speak more than six languages and up to nine languages. The most linguistically diverse cities were identified to be Delhi and Mumbai, which had a language richness of eight because of being urban centres. In case all 121 major languages were to be considered, many of the districts in North-eastern states would have much higher language richness.

These numbers are indicative of the language diversity in India and the language richness even at the district level. With so many spoken languages in the country, it is impossible to identify one common language understood and spoken by all the residents of the country.

Laws, such as one propounded by Article 348(1), have major implications on the judicial system of India where the common man may be prevented from comprehending the procedure and his rights, let alone getting access to justice, owing to the language barrier. Hence, to cultivate the confidence of the common man, the goal of the legal system should be to eliminate language difficulties, making the process of entering courts less burdensome and daunting for a layman. We firmly believe that the client should be informed about the case’s proceedings and current status just like the advocate, to make more informed decisions concerning their disputes.

The concern regarding Article 348(1) was also raised by the Chief Justice of India N.V. Ramana.

The CJI noted, “From time to time, there have been demands from various regions to allow the usage of [the] local language in the proceedings before the high courts.”[3] The idea of recommending the use of regional languages in High Courts has been pursued by several state governments and even the President of India.[4]

In view of the above, we suggest that innovation in science and technology and advancements such as Artificial Intelligence (“AI”)[5] technology should be used in the translation of judicial documents, legal research assistance, and process automation. Translation of legal texts, judgements, and court proceedings to local and regional languages will help solve the issue of language-based disparity.

The Government of India has already taken some steps to overcome this issue. One of the steps taken to bridge the gap created by the language barrier is the introduction of the Bhashini project, which is an AI-based language translation platform that aims to provide all Indians with easy access to the Internet and increase the digital content in local Indian languages.

The e-Courts Project has been another initiative by the Government of India to tackle the issues of language disparity in India. This project was implemented with multiple objectives, one of which was to enhance judicial productivity, both qualitatively and quantitatively, to make the justice delivery system affordable, accessible, cost-effective, predictable, reliable, and transparent. To achieve the objective of making justice more accessible, the government sought to make websites accessible in the local languages of the litigants, lawyers, and other stakeholders in a dispute.

Incorporation of Technology in ODR

With the use of such initiatives, justice can not only be made available in the formal court-oriented legal system of the country but its potential can also be utilised in Online Dispute Resolution (commonly known as “ODR”).

ODR is based on Information and Communication Technology, which makes dispute resolution seamless in such a way that it eliminates the need to meet physically. The use of natural language translation, i.e., the automated computation and processing of human languages and gestures including their expressions, texts, documents, commentaries, and digests, made by using their creative thinking skills, is a natural incorporation in it.[7]

Besides this, translation can also be used to convert scanned handwritten documents, letters, or notices into printed documents in one’s language of choice. But how would this actually work in action? Let’s jump into an example:

A man from Hyderabad named “A” is the initiating party in a dispute that has been sent to Mediation. “B” is an individual from Himachal Pradesh who is the respondent. “M”, a native of Sikkim is appointed as the mediator because she is an expert in solving such kinds of disputes. All three of them are most comfortable in their own local languages and hence for an effective mediation session, they require to speak their heart out, in their own local language.

In such a scenario, the following can be used:

Combining the aforementioned points would in essence help make ODR as convenient as possible. In order to accomplish this objective, we need to make the whole process seamless, more efficient, and with much more advantages than physical communication.

The only drawback of such a system would be the gap that comes between machine translation and human speech. It will require an intelligent interface system to understand human speech, separate the accent, colloquial words, and jargon, and understand the essence of the spoken words while translating. Issues may also arise while translating technical and legal jargon, as a layman may not be familiar with them.

While this is a challenge in translation, it is not impossible to develop an Intelligent Interface System which would bridge the significant communication gap between human users and other AI systems — for example, by enabling the use of natural language as inputs and outputs of the system.[8] The issue of translation of colloquial words can be resolved by introducing a machine learning platform which can be programmed to understand and translate the colloquial words of legal texts into easily understandable speech in the regional language of the disputing parties. This AI-based translator will not only be inexpensive to utilize but also easily accessible due to remote access provisions and a reliable system for the parties involved. These incorporations will fulfil the objective of making law accessible and understandable for the layman.

Ananya Singhal is a member of the Research and Content team at Presolv360.

View all posts by Ananya Singhal 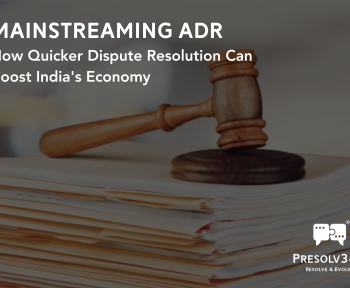 How Can Quicker Dispute Resolution Help the Economy of a Country